Why we use Ab Mat?

What Does an Ab Mat Do?

An ab mat is a simple piece of equipment to protect the back and make sit-ups more comfortable. They can also help improve your sit-ups by taking the movement out of the hips and placing more focus on the abdominal muscles.

Ab mats are usually found in CrossFit gyms, where sit ups are performed in large sets. This is one of the reasons that they’ve gained so much popularity, but they’re great for you and can help you build stronger core muscles.

Today we’re going to discuss ab mats, how ab mat sit ups compare with the regular kind, and discuss top ab mats on the market. Read on if you’re looking for a simple piece of kit to improve your core training!

What Are the Benefits of an Ab Mat Sit-Up?

The point of an ab mat is to take a sit-up away from the muscles of the hips and make sure you’re using your abdominal muscles.

In a regular sit up, it’s very easy to over-stress the hip flexors and cheat the movement. They’re also short-range, since the bit of your body you’re moving (extending through the spine) is usually stopped by the floor on your back.

When you use an ab mat, however, you get to move through a longer range since it increases spine movement. In addition to this, the increased focus on spinal extension/flexion means you take the hip flexors out of the bottom of the movement.

These two changes can make a sit-up considerably more effective, but they also reduce your risk of injury. Over-using the hips and poor range of motion are two of the biggest problems with sit-ups but the ab mat solves both. 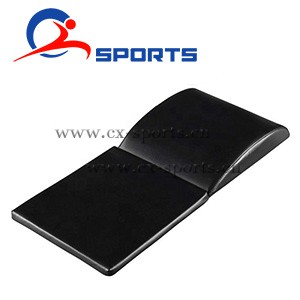 One of the big mobility and posture problems in the 21st century is dysfunctional hips. We sit too often, which causes weak hip extensors and tight hip flexors.

The problem with a regular sit-up is that they often contribute to this problem. You can cheat a regular sit-up with the hips, and this can place too much stress on these tissues, which are already dysfunctional.

The ab mat makes this far more difficult. Cheating the hips won’t help you move from an extended spine to a flexed spine – you can’t cheat that part of the movement. The addition of the sit-up pad thus makes the sit up more effective and less harmful.

Performing a sit-up on an ab mat is far more ab-focused than a regular sit-up. Expect better results and less hip soreness/tightness!

One of the best things about the ab mat is how it extends the range of motion for the sit-up. This is really useful for making extra gains, but specifically, because it allows you to build strength for more advanced core movements.

The regular sit-up moves you from a “neutral” position to a crunched, rounded over position. This isn’t much use for things that require core control since you’re usually not trying to get to a rounded-over position.

However, when using an ab mat you begin in an extended position and end in the crunched position. This is great because strength to pull into – and past – neutral positions carries over really well to strength and gymnastic movements.

Strength is very specific, and a regular sit-up probably isn’t going to be much use for performance or longevity. However, the ab-mat sit-up is a great choice for improving core control and spinal health through a nice, long-range.